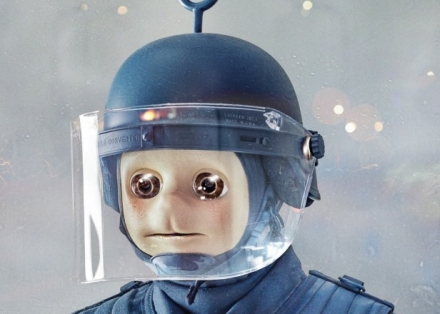 For those who have been following Fatima Al Qadiri, Brute isn’t unfamiliar territory. Or at least that’s what I thought on my first listen-through the Kuwaiti composer’s new full length album, out now. In fact, Brute is quite subtle. While Al Qadiri continues to develop on similar themes as in her past work – the industry of war, the balance between play and violence, video game soundtracks, a kind of futuristic occultism – Brute situates itself amid the crisis of modern race dynamics in America. Utilizing a vocal sample of retired LAPD sergeant Cheryl Dorsey, for example, Al Qadiri constructs a most delicate patchwork of grime, ghosts, and racial phantasmagoria. One might say that Al Qadiri is at her best in the mode of the soundtrack, Brute being a kind of soundtrack whose central violence revolves around police brutality.

In a 2014 interview at the Red Bull Music Academy, we heard Fatima Al Qadiri say, “It’s not brute force,” referring to her martial arts-inspired approach to composition. And yet, two years later, we have Brute. I would argue, however, that as much as Al Qadiri has mastered an agile, fit-for-battle sound, the subtleties in her work have continued to multiply, making Brute an album whose true value is only apparent on the third or fourth listen.

Below, I offer my thoughts on some tracks from the album, highlighting its lows and highs.

Brute is out on Hyperdub.